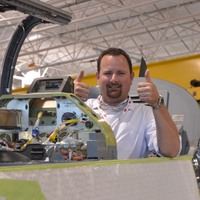 Before leaving high school, Jeremy started his aviation journey by managing a flight school in Northern California. After serving in the US Army and attending Embry-Riddle Aeronautical Universtiy, he returned to eventually acquire that same school and operate it successfully until January of 2001.

In the Summer of 2001, Jeremy began his work in Aerospace engineering and design, working on aerial firefighting systems for the Blackhawk and EC225 helicopters, as well as enhanced systems for the C-130. Here Jeremy excelled in reverse engineering, developing aircraft repairs, CNC programming, testing and project engineering.

Moving to Hood River, afforded Jeremy the opportunity to work on ScanEagle and Integrator UAS payloads, ground stations, structures, electronics and cameras, while employed at Insitu.

In a never ending pursuit of knowledge and to be closer to his family, Jeremy made the move to Oklahoma. In his new position, he is in charge of anti-skid brake system aircraft integration, including; structural and electrical integration, flight testing, project engineering, customer relations and technical presentations.

His adventuring nature now has led him into the expanding world or SUAS operations. He cannot wait to see where it leads.