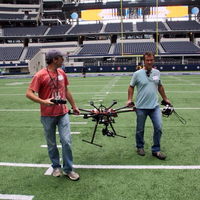 Broadcast media background of 23 years which includes media production, commercial production, writing, shooting and editing. Have produced commercials and shows for every genre under the sun. Plus directed live events with crews ranging from 5 to over 100 people. With the advent of aerial rigs we instantly realized the impact they will have in this arena. No longer are we tied to a 40 foot jib or having to spend hours laying down dolly track. Albeit still in its infancy aerial rigs are quickly making their way onto production sets and into every form of visual media. We enjoy shooting anything that the concept calls for. From simple shots to establish a scene to the complex tracking maneuvers needed for auto chase or action scenes involving people. We are full geared with two S1000's flying the S1000's, GH4 or sony NEX. a couple of smaller rigs with gopros for that unique look of speed and agility. We are putting the finishing touches on our X8 heavy lifter which when complete will be able to handle a 28lb payload which opens the door to flying cameras such as the Red or other cinema camera along with the other peripherals movie makers demand. We also have a full compliment of ground based gear including the Canon Cinema series cameras and a bevy of lenses to cover all the ranges.

Member since Aug. 20, 2015
Request a Quote
License # 11477
Insurance coverage Not specified
Services Agriculture, Boating and water sports, Cinematography, Construction, Editing, Infrastructure, Real Estate, Roof Inspection
This pilot has not uploaded any images into their portfolio yet.
This pilot has not uploaded any videos into their portfolio yet.
Login to leave a review.